High above the Neckar valley, the Dilsberg Fortress Ruins tower atop the eponymous hill. On hot summer days, the fortress ruins offer the ideal destination for families. The striking fortress "feeling" between these thick walls is a great way to spend hot days, with the added bonus of a surprising and mysterious subterranean passageway, a tunnel leading deep into the hill: a spot guaranteed to be especially cool.

A COOL DESTINATION HIGH ABOVE THE VALLEY
The fortress’ highest tower can be seen from afar. The hexagonal castle keep still towers above the castle and the small town of Dilsberg from its hilltop above a bend in the Neckar river. The castle keep offers a panoramic view of the river valley and the surrounding hills of Odenwald forest. The impressive castle grounds boast towering walls and associated comfortable temperatures. Those seeking even cooler temperatures can descend into the depths of the castle, into the mysterious subterranean passageway. For generations, legends and stories mentioned a former secret underground tunnel through Dilsberg hill. The passageway wasn't uncovered again until the 1920s, but it still offers the opportunity for adventure today.

A SECRET UNDERGROUND PASSAGEWAY
The story of the mysterious well, its deep shaft and its tunnel bear telling. The well has been around since at least the 12th century. When the fortress was expanded in the 17th century, a traverse was added, chiseled 78 meters through the rock.Centuries later, this tunnel carved into the hill became the secret passageway. Although it had been filled in, people remembered this underground passage through the hill. The well and tunnel were uncovered again in 1926, and now this impressive space is open for viewing. The fortress ruins are a popular location for celebrations, and the rustic rooms are often rented for private events.

THE STORY OF THE FORTRESS RUINS
This story begins long ago. In the middle of the 12th century, the counts of Lauffen erected a castle on top of the 288-meter-high Dilsberg hill. They built a keep, surrounded by an oval curtain wall and moat. The castle was intended to secure the counts’ reach, especially with regard to the powerful counts palatine in nearby Heidelberg. But in the 14th century, the counts palatine along the Rhine succeeded in taking possession of the castle. The new masters expanded the castle into a fortress, including a shield wall, a new keep and an outer bailey with outbuildings. Dilsberg became an important military and administrative location for Heidelberg's counts palatine. 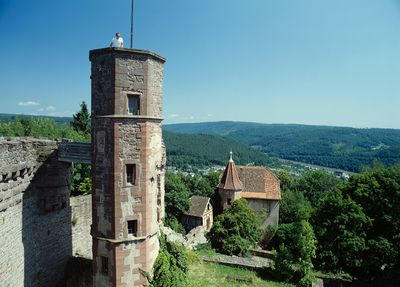 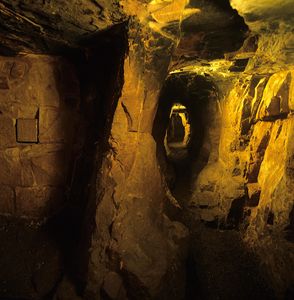