Weikersheim Palace is considered to be the most beautiful of all the palaces in Hohenlohe. The perfect preservation – not only of the palace but also of the surrounding area of the Counts’ residence – is impressive. The highlight is provided by the baroque palace gardens with their unique wealth of figures.

A visit to the Counts of Hohenlohe

Weikersheim Palace is considered to be the most beautiful of all the palaces in Hohenlohe. The perfect preservation – not only of the palace but also of the surrounding area of the Counts’ residence – is impressive. The highlight is provided by the baroque palace gardens with their unique wealth of figures.

Around 1600, Count Wolfgang II von Hohenlohe and his wife Magdalena rebuilt the palace in Weikersheim anew. Parts of the moated castle previously built on the site have been preserved, including the distinctive tower. Then the Saalbau (Hall Building) with the famous Knights’ Hall and the splendid palace façade facing the garden with its striking gables was built. The plan for the layout of the palace (in the form of a triangle!) also dates to this time. The Knights’ Hall is an unforgettable experience for everybody who has visited the palace: The mighty room, built around 1600, is decorated by large figures of game – including an elephant.

In the first half of the 18th century, Count Graf Carl Ludwig and his wife Elisabeth Friederike Sophie enlarged the palace into a baroque residence. Inside, magnificent living rooms were created. In the direction of the town, they provided the palace with a forecourt in the form of sweeping semi-circular buildings. The most magnificent legacy of this period, however, is the baroque palace garden with its fountains, the countless figures and the Orangery. In the 18th century, the dynasty of the Weikersheim Counts died out. Thereafter, the palace was only intermittently lived in and only slightly changed. For generations, it sank into an almost Sleeping Beauty slumber. For today’s visitors, this is a great piece of good fortune. This has enabled a rural residence completely to be preserved, whereas in other places such residences have long since disappeared.

The baroque garden as a highlight

The Weikersheim Palace Gardens are a paradise in a unique state of preservation. In the first half of the 18th century, Count Carl Ludwig von Hohenlohe-Weikersheim laid out the baroque gardens on the southern side of his palace in a variety of shapes. Hardly anywhere is the baroque experience as authentic as in the Weikersheim Palace Gardens – and the whole ensemble on the attractively manageable scale of the residence of a Count.

The dwarves of Weikersheim

The wealth of figures that have been preserved from the time the baroque gardens were created is exceptional. They populate the gardens at all the creatively important places. The “Dwarves’ Gallery”, a group of dwarves in the gardens, is not only famous but also a rarity. There are also other garden experiences awaiting you here: for example, the orchard with its historical fruit trees, the romantic Rose Garden, the City Garden with its old trees and – in summer – the Alchemy and Witches’ Garden. 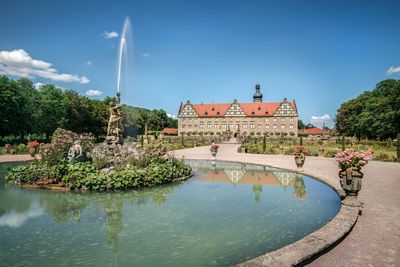