Solitude Palace is set in an idyllic location: a popular tourist destination in the densely forested western part of Stuttgart, where the fantastic view is captivating. As the most sophisticated and most personal creation of Duke Carl Eugen, it has to this day lost nothing of its charm.

A paradise for the Duke

Solitude Palace is set in an idyllic location: a popular tourist destination in the densely forested western part of Stuttgart, where the fantastic view is captivating. As the most sophisticated and most personal creation of Duke Carl Eugen, it has to this day lost nothing of its charm.

Carl Eugen, an 18th century Duke, loved building new palaces. In the Ducal hunting grounds, on the heights west of Stuttgart, he initially intended to erect a simple hunting lodge, a stylish place of refuge. He called it “Solitude”, the French word for “isolation”. The Duke himself was greatly involved in the planning, which began in 1763. Elegant country houses were all the rage – not only in old Europe but also in the United States, where George Washington’s country house Mount Vernon and Monticello for Thomas Jefferson were built at about the same time.

Elegant rooms and an enormous garden

The furnishings were sumptuous: the Duke had exquisite taste. Within the confines of a relatively small space, in Solitude Palace you experience rooms on the threshold of baroque to classicism – precious elegance. The Duke, though, did not live in the palace: this was the purpose of the Zirkelbauten (rural buildings forming a semi-circle around the main central building). A huge and inventive baroque garden once extended around the palace; in later times, enormous fruit orchards grew here. The great garden was tended by Johann Caspar Schiller, the father of the famous poet Friedrich Schiller.

A magnificent view into the countryside

From the elegant palace terrace or through the arched gateway: today the view from Solitude of the wide countryside is just as stately as it was 250 years ago, and is a must for a souvenir photo. On special occasions, it is even possible to visit the cupola of the summer residence. You can still see the avenue built by the Duke between his residence in Ludwigsburg and his favorite palace on the heights – as straight as a die! 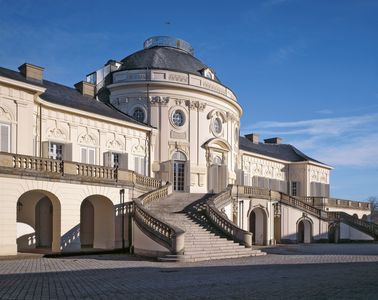