Situated directly in front of the gates of the old Imperial City of Wiblingen, stands a Benedictine monastery, founded in 1093. This baroque complex is spacious; elongated buildings enclose the heart of the monastery – the magnificent church. This is the last heyday of baroque church architecture in Upper Swabia. The Wiblingen Library Hall is a must for any visitor: lavishly decorated with stucco and paintings – it is the highlight of each visit.

Situated directly in front of the gates of the old Imperial City of Wiblingen, stands a Benedictine monastery, founded in 1093. This baroque complex is spacious; elongated buildings enclose the heart of the monastery – the magnificent church. This is the last heyday of baroque church architecture in Upper Swabia. The Wiblingen Library Hall is a must for any visitor: lavishly decorated with stucco and paintings – it is the highlight of each visit.

History of many centuries

The monastery itself is far older: as far back as the 11th century, the first monks came to Wiblingen from the St. Blasien Benedictine monastery in the Black Forest. It is not known how the first monastery complex looked. By 1700, the monastery had become so prosperous that the monks were keen on demonstrating their power and wealth with a splendid new baroque structure. And as everywhere else, the new structure was intended to show that the abbot was not only a spiritual but also a secular ruler. The monastery complex – planned on an enormously large scale – could never be finished as long as the monastery still existed. It was, in fact, only completed at the beginning of the 20th century – now as a Württemberg barracks.

The majestic structure of the former Wiblingen Benedictine monastery is today a highlight along the Upper Swabian Baroque Route. Especially the Library Hall in its sweeping rococo forms is a prime attraction for visitors. The monastery church – the last great baroque structure of the 18th century erected in Upper Swabia – is a masterpiece in light colors. You can gain a vivid impression of the history of the monastery in the Monastery Museum with its perspective of the everyday life of the monks who once lived under the rule of the monastery. Today, Wiblingen is a suburb of Ulm, the city with the famous Gothic Minster. While here, you should not miss out on the church tower – with a height of 161.53 meters the highest in the world. 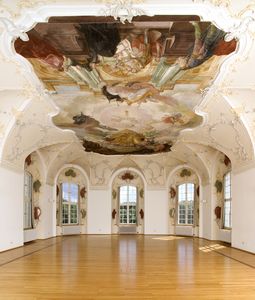