Monastery and palace alike: this is the impression created by the mighty complex of Salem. The large roof of the Gothic minster and its ridge turret can be identified in the center. The monastery church is surrounded by the broadly lengthened palace-like baroque structures – light and symmetrical. Founded in 1134, Salem rapidly advanced to become one of the most important Cistercian monasteries – as an imperial abbey, the convent was subordinate only to the Emperor.

Masterpieces in a beautiful landscape

Monastery and palace alike: this is the impression created by the mighty complex of Salem. The large roof of the Gothic minster and its ridge turret can be identified in the center. The monastery church is surrounded by the broadly lengthened palace-like baroque structures – light and symmetrical. Founded in 1134, Salem rapidly advanced to become one of the most important Cistercian monasteries – as an imperial abbey, the convent was subordinate only to the Emperor.

Baroque splendor after the monastery fire

In 1697, a great fire destroyed the old monastery while leaving the church intact; following on this, the spacious new baroque-era buildings were constructed. The great masters of the time were involved in the interior furnishings – first and foremost the sculptor Franz Joseph Feuchtmayer. One of the centerpieces of the complex is the Imperial Hall, which takes up one and a half floors in the central section of the east wing, decorated with magnificent stucco figures by Feuchtmayer on ceilings and walls. In spite of its name: the Emperor never came to Salem. Thus the monastery merely demonstrates that it was subordinate to the Emperor – and otherwise nobody at all.

An oddity as an aside: following the 1697 fire, the Cistercian monks in Salem established themselves as true pioneers in fire protection. Having learned from their experiences, they purchased a mobile fire extinguisher, which had only just been developed. Today this ultra-modern early baroque fire-fighting equipment is one of the showpieces of the Salem Fire-fighting Museum. This unusual museum has long since become a renowned attraction far and wide – and not only for families. The walk through the new Monastery Museum where the treasures from the glorious past of the imperial abbey are now on display, is more than impressive. Taking centerpiece, however, is the magnificent late medieval High Altar of St. Mary designed by Bernhard Strigel.

Winemaking and pleasure in Salem

Winemaking cannot be left out when on a tour of the history of Salem. The historical torkel, the impressive wine press with its mighty beams made from a whole tree trunk, provides an indication of the importance of winemaking. There are special tours where you can even visit the venerable wine cellars. The courtyard of Salem Monastery was invariably a lively place: craftsmen worked here and the flourishing agriculture provided for brisk activity. This was matched by the artisans who had their workshops in the farmyard buildings – an atmospheric neighborhood next to the margrave vineyard and the wine press.

The gardens of Salem Monastery and Palace are reminiscent of the tradition of the Cistercian monastery’s gardens. The Cistercian Order was famous for its expertise and tenacity when it came to agriculture and horticulture. The typical mixture of fields, the wine culture and cultivation of fruit and – first and foremost – the sophisticated water technology with channels and ponds for breeding fish – have been preserved in Salem. The area surrounding the former Cistercian monastery is a paradise of loveliness and is well worth discovering. Today Salem is famous as a school, which has been attended by many prominent figures, such as Queen Sofia of Spain and Prince Philip, Duke of Edinburgh. 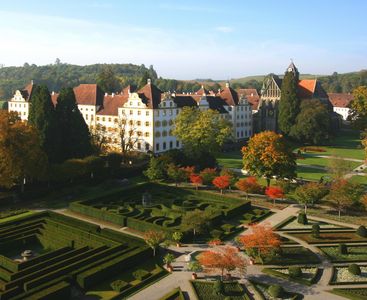