Set in an idyllic valley in the heart of the Black forest – the setting of Alpirsbach is impressive. The Romanesque monastery church is a structure of awe-inspiring monumentality, concentrating on the essentials. Built by Benedictine monks in line with the Hirsau Reform Movement in the 11th century, it is one of the few remaining monasteries in Southwestern Germany of this type.

The Middle Ages in the Black Forest Valley

Set in an idyllic valley in the heart of the Black forest – the setting of Alpirsbach is impressive. The Romanesque monastery church is a structure of awe-inspiring monumentality, concentrating on the essentials. Built by Benedictine monks in line with the Hirsau Reform Movement in the 11th century, it is one of the few remaining monasteries in Southwestern Germany of this type.

Monastery of the Benedictine Order

The first stone monastery church was consecrated as early as 1099. The tower of this small church is still preserved, the oldest witness of the monastery complex. The layout of the monastery is based on the specifications laid down by the Benedictine Order. The cloister – the area where the monks lived and worked – is directly adjacent to the monastery church. The buildings are grouped round the Late Gothic cloister and display, well preserved, the 15th century state of the ensemble. When walking through the impressive rooms, you gain a tangible sense of the life of the monks characterized by asceticism, work and prayer.

In the Reformation Period, Alpirsbach became a monastery school. A spectacular find from 1958 helps modern-day visitors to imagine everyday life in the school. Hidden under the old boards, well-preserved everyday objects dating to the time of Albrecht Dürer and Martin Luther were found, such as men’s pants. Nowhere do you come so close to the people of that era as in Alpirsbach Monastery.

The Black Forest and Beer

The tradition of beer brewing is also centuries old: in many monasteries, the monks brewed good beer. Alpirsbach is home to the Alpirsbacher Klosterbräu, a brewery famous far beyond the borders of Baden-Württemberg. A visit to the Brewery Museum is well worthwhile. 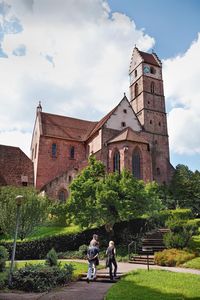